The combination of Paragon’s routing and scheduling software with Territory Optimiser is giving a boost to News UK’s direct-to-consumer routes by helping the planning team to cluster deliveries and shorten routes. This routing improvement means that fewer vehicles are necessary, which consequently reduces both the cost and carbon footprint of the operation.

The company selected the software solution to create optimised delivery territories within the M25 corridor, enabling The Times to reach consumers by 7 am each morning. The new approach allows the fleet of owner-drivers to gain greater knowledge of their delivery territory, with greater density of drops along shorter delivery routes.

“Territory Optimiser is a good addition to the Paragon routing and scheduling software which we already use for our retail store deliveries. By using the software, we have achieved a significant 16% reduction in the number of routes. Combining Territory Optimiser output with driver expertise and feedback has allowed us to unlock significant benefits. Each of our direct-to-consumer drivers makes up to 180 drops a day and with this additional planning tool, we can keep the deliveries clustered tightly and the routes short. This enables the drivers to learn their routes and improves delivery efficiency as they become more familiar with their own territory,” says Darren Barker, Head of Logistics Development, News UK.

Nicola Dobson, the company’s Operations System Manager, adds: “The software also enables us to manage the workload balance among the drivers. This a great benefit for them as they get to know their delivery areas intimately and we can add new consumers to their territories as necessary. With the delivery territories it is so much easier than with traditional straight routes that can end a long way from where the driver started out.”

Commenting on how easy the software is to use Nicola Dobson says: “Our planners are familiar with Paragon’s routing software, so they soon learnt how to use Territory Optimiser to create the direct to consumer territories. It is very intuitive, plus the Paragon support team was at hand to help us.”

News UK publishes The Times, The Sun and The Sunday Times and the Company’s titles are among the world’s most successful. Further brands that are part of the group include the Times Literary Supplement and milkround.com. The News UK group also has investments in fashion website BrandAlley.co.uk. In 2007, News UK became the UK’s first carbon neutral newspaper publisher. 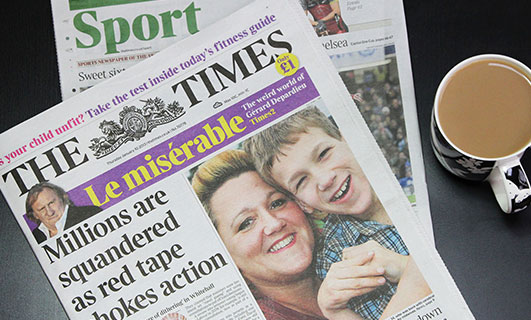