Nogales Produce Inc., a provider of Mexican fresh produce, groceries and restaurant supplies to more than 2,000 stores and restaurants in the United States, has adopted Paragon’s routing and scheduling software to help improve its increasingly complex delivery operations.

Nogales expects to save more than 15 per cent in operational costs by implementing Paragon’s Single Depot software. The specialist food supplier picked the company after an extensive selection process that started with a list of ten routing technology providers. Nogales preferred Paragon’s superior functionality as well as its compatibility with existing business applications.

Nogales’ customer base is varied, from convenience stores, through government facilities and school districts, to wholesale and retail operations. Its biggest customers require daily deliveries of up to two loads of Mexican food products, bringing the typical daily total to 3,000 deliveries. Large retail and wholesale customers, in particular, have fluctuating demand because they rely on multiple suppliers, some of whom fail to deliver, leaving Nogales to fill the gaps.

“We have to be able to adjust our staffing and our delivery schedule on a day-to-day basis to run efficiently,” explained Albert Rodriguez, Senior VP of Operations at Nogales Produce Inc. “We didn’t have the knowledge we needed to be efficient, and without that we couldn’t serve customers the way we’d like to.”

Previously, Nogales relied on a manually-produced schedule, with the task of adapting to last-minute changes left mostly to Nogales’ drivers – an inefficient method, since drivers do not have access to the big picture of the entire delivery network. “You have drivers crossing all over each other,” said Rodriguez. “You add one customer and it begins to happen, then you add another, and the inefficiencies really start to stack up.

“Also, when someone is doing the routing manually, they have preconceived notions about what is best and that’s not always the case. Or perhaps they want to take care of one customer over another because it’s an older relationship. But that shouldn’t come into consideration; you need to route based on what is best for all customers.”

Now, Paragon’s routing and scheduling software will allow a central planner at Nogales HQ to quickly identify opportunities for greater efficiency while also achieving increased customer service levels, even as the schedule changes. “With Paragon, we know how long the driver should be out there, plus we can give that information to the customer, so they know when to expect delivery,” said Rodriguez. “I think this is going to distinguish us compared to our competition. Giving customers accurate updates is a game-changer for us.”

Nogales anticipates a minimum 15 per cent reduction in driver costs, with other savings expected across its delivery operations. With more efficiency, the company has less produce on the road, and drivers out for fewer hours which leads to less liability, so Nogales will reduce insurance costs, among other factors. The food specialist also expects route planning time to be significantly reduced, allowing it to redeploy resources elsewhere.

“We are proud to facilitate greater operational efficiency and better customer service for a growing, family-owned business such as Nogales,” said William Salter, Managing Director of Paragon Software Systems. “Not only will they be able to serve existing customers better, they can use Paragon as a strategic tool to guide their growth in the future.” 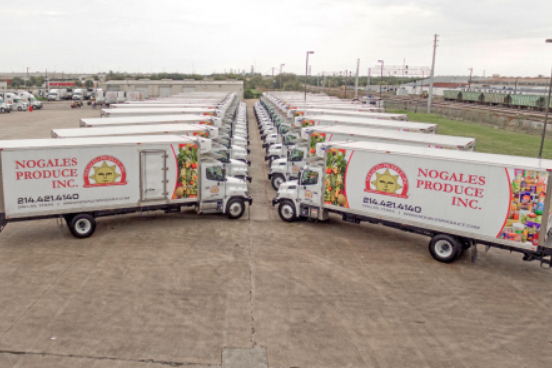