Food and drink Operational routing and scheduling Supermarkets and wholesalers

Sainsbury’s is seeing the benefit of rolling out Paragon’s routing and scheduling software across its national distribution network.

Sixteen depots are now benefiting from implementing Paragon’s routing and scheduling software with telematics to dramatically enhance the accuracy and execution of each day’s complex transport plans.  The system has increased driver productivity by 8%, improved empty running by 12%, cut store turnaround times by 15% and increased on-time delivery levels by 17%.

For over three years, Paragon software has underpinned the efficiency of daily deliveries from Sainsbury’s 19 distribution centres to 527 supermarkets and 276 smaller stores, as well as the allocation of tractors, trailers, rigids and drivers to routes. Using Paragon’s “resource managed planning” capability, which plans routes against the individual driver shifts and available vehicle resources, Sainsbury’s ensures that each day’s multi-shifted transport plans are realistic and achievable. Now, Sainsbury’s is capitalising on tightly integrating Paragon routing and scheduling software and Route Execution with Isotrak’s Active Transport Management System (ATMS) to introduce unprecedented levels of certainty and control into the operation.

“Uncertainties are a fact of life for any transport operation so we build contingencies into our schedules, but they add costs,” says Darren Jones, Sainsbury’s Head of Logistics Strategy.  “The more uncertainty that can be eliminated, the greater the control over costs.”  By using Route Execution to monitor the execution of the delivery schedule and Isotrak’s ATMS to capture real-time data such as vehicle location and driver tachograph outputs, Sainsbury’s gets accurate data with real value. When vehicle turnaround time at stores emerged as a critical factor, for instance, the planned contingency was cut by a consistent 15% by setting store targets.

But there’s more to it than this, as Darren Jones explains, “Route Execution is looking forward all the time, making sure pre-set parameters such as delivery windows are met. If any criteria look like being breached, it will re-spin the schedule to avoid the breach.” The implications of this are significant. If drivers are predicted to return early or late, Paragon automatically reallocates loads that will still meet promised store delivery windows (avoiding curfews and delivery restrictions), are achievable within the planned shift, and are efficient within the overall plan – to maintain exceptionally high driver and vehicle use levels.

In terms of service to stores Sainsbury’s is now benefitting from a 15% reduction in overall store turnaround time while also improving the number of deliveries making it to stores within agreed time windows by 17%. With CSR goals in mind, the Sainsbury’s team has been able to report a 12% improvement in empty running levels with 2,000 fewer empty vehicle journeys per week, and over 500,000 litres of fuel being saved across the four sites, cutting 1.4million kg of CO2 emissions. Efficiency improvements have also been realised in terms of an 8% increase in driver productivity and an overall 3.8% reduction in distance travelled per year.

“We are delighted with the success of this implementation for Sainsbury’s,” says Paragon Managing Director William Salter. “It required extensive two-way integration between Paragon and Isotrak but it was well worth the development effort. Plans for large, multi-shifted operations like this can unravel during the day, losing some of their original efficiency, but Sainsbury’s can now rework and optimise plans throughout their execution.” 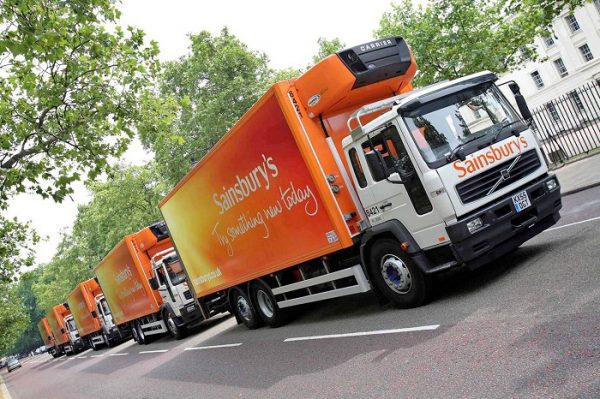